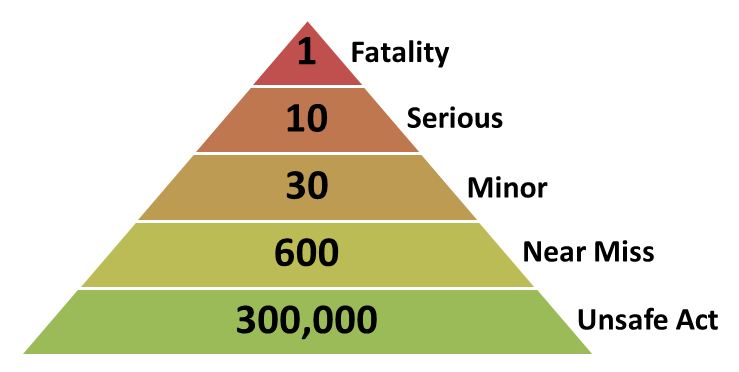 Most working people are familiar with the safety triangle in some form:

In an unsafe work culture, unsafe acts and conditions become normal. People hardly notice them any more. Occasionally, there’s a near miss. Since no-one was hurt, it’s not taken seriously; it’s just something to joke about at lunchtime. And then someone is injured. It doesn’t happen often, so people just shrug it off. It was a one-off, it’s a dangerous industry, it’s obviously their own fault, these things happen. And then someone is killed.

Afterwards, sometimes, things change. But the only change that makes a difference is to start at the less-serious end of the scale: fix the root cause, fix the culture, fix the unsafe acts, fix the belief that frequent near-misses are normal, fix the attitude that it’s someone else’s problem. It’s not: it’s everyone’s problem. If the only people who are trying to “fix it” are the administrators, the people who aren’t out on deck or down the engine room every day, the only change is a flood of extra paperwork.

The fact that there’s an unsafe work culture in a workplace doesn’t mean that everyone’s doing unsafe things all the time, or that no-one’s interested. A few people do their best to do the right thing, but they give up after a while. It’s exhausting to be the odd one out.

This is exactly how rape culture works.

It doesn’t mean that everyone is a rapist, or that everyone stands around sipping coffee, watching that guy rape someone; it does mean that the behaviours at the less-serious end of the scale become normal, in exactly the same way as unsafe acts in an unsafe work culture.

In the same way that normalising unsafe acts leads to fatalities, normalising derogatory jokes and name-calling builds a culture that leads to harassment, bullying, assault and death.

While “Rape Culture” is a hot topic right now (and rightly so), exactly the same thing applies to other forms of harassment culture.

Black jokes? Muslim jokes? Retard jokes? Gay jokes? Rape jokes? They’re all normal, aren’t they? Everyone laughs, so it must be okay. So what if that one guy shoves the victim around a bit, pisses in their boots. They don’t mean anything by it. You wouldn’t do it, but they’re always like that. It’s just a bit of fun. So you say nothing. And, over time, it becomes normal. It becomes normal to joke about that person, the outsider. It becomes normal to push them around. It’s interesting to think about how different that “fun” looks from the other side. And if they get raped, murdered, or kill themselves, well, that’s not your fault either. You were just joking.

As members of a community, it is our problem, and it’s everyone’s responsibility to fix it. The administrators certainly can’t.