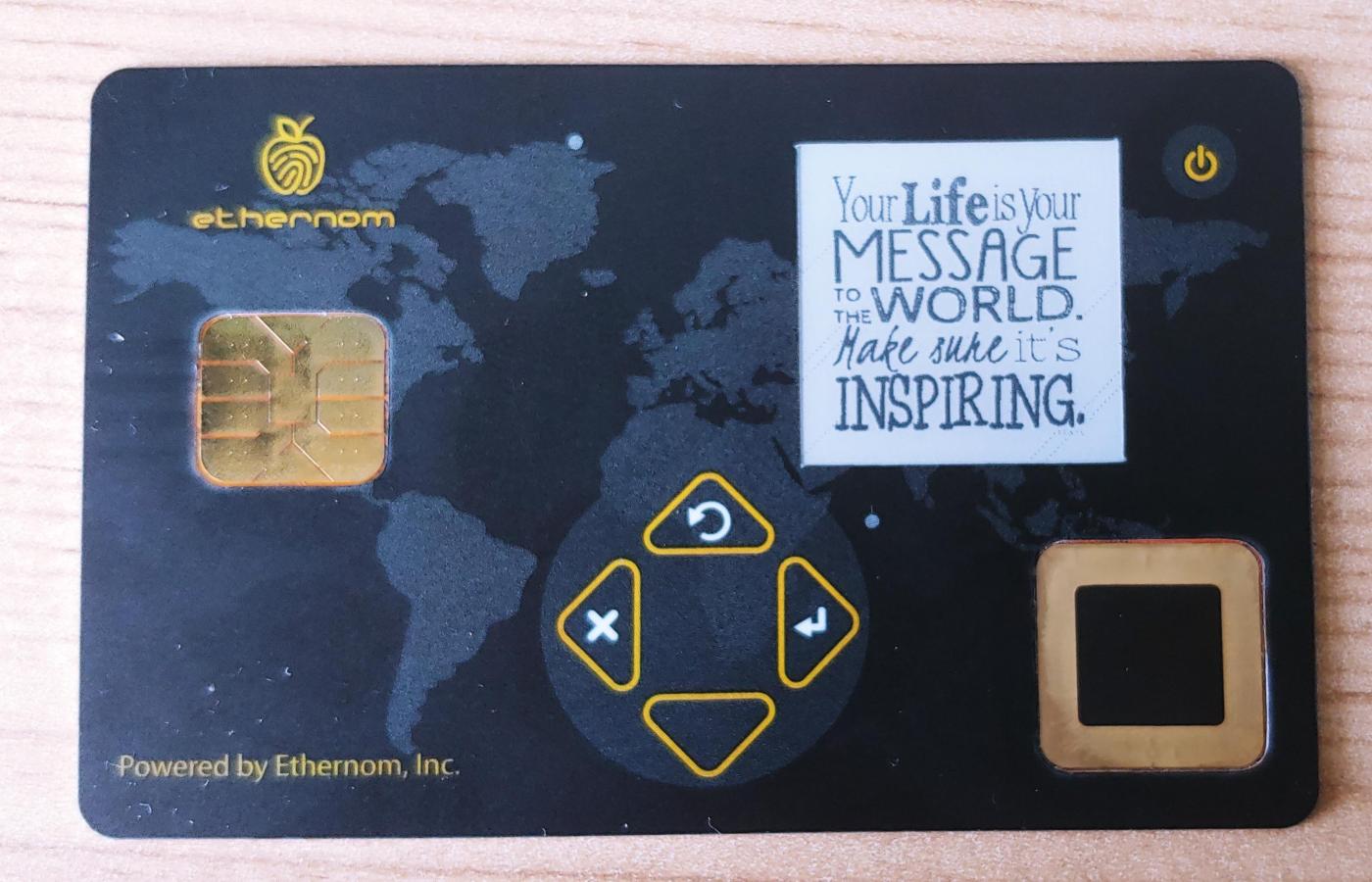 From the Beamu Kickstarter page

Unlike so many Kickstarter projects, this one actually arrived, and at first glance is pretty close to what they advertised.

The outer box is bigger than expected, but the actual packaging is fairly compact and secure. The box includes the Beamu, which really is the size and weight of a credit card, a charging module, USB cable, and a little pamphlet with a diagram of the basic functions and a link to the website.

I’m really impressed that they managed to get everything into such a small form-factor!

On the website, a beautifully clear short instruction video walked me though everything I needed to do. The tutorial covered charging my card, turning it on, using the buttons, entering and retrieving information, registering my fingerprint, installing the mobile apps, and connecting it to my phone.

Charging is simple. I pledged for the version with a USB C charging module. The module weighs 10g (without the charging cable). The card plugs into the module, and the module plugs into any USB power source.

The card is held securely in the charging module, and a red light turns on to show that it’s charging. When it’s fully charged, the light turns green. I can’t find information about how long the battery’s supposed to last between charges.

Once charged, the on-Beamu tutorial used the e-ink screen to guide me through practicing how to use the buttons to enter data, then registered my fingerprint.

I use Android 9 on an LG-G7+ ThinQ. Two apps are available on the Google Play Store, and I installed both on my phone with no problems. They ask for the following permissions:

As a non-expert, I can see uses for all of those, so they seem reasonable. Regardless, I still use Bouncer to automatically remove the permissions that I don’t like apps to have while I’m not using them.

This was surprisingly straightforward: it worked as designed, without forcing me to fiddle with anything in settings.

Within the app, you can:

When you connect Beamu to the Device Manager, if you have internet access, it will automatically install any firmware updates.

The app is pretty bare-bones, but it’s easy to use, and it actually works. The target audience for Beamu is likely to be more interested in the fact that it actually works as intended. The connection was stable while the screen is on, although for security you need to reconnect when the screen turns off.

This uses the same bare-bones design as the Device Manager, and connecting your Beamu uses the same process. The Password Manager keeps your passwords secure in a local vault: no data is shared to the cloud.

Once in the Password Manager app, you have the following options:

As a long-term user of another password manager, I have far too many online accounts and passwords. The fact that I can’t bulk-import passwords into Beamu (yet), means that I’m unlikely to actually use this function. Individually copying details for hundreds of accounts isn’t practical.

At the moment, the system can store details for up to 100 accounts on Beamu. The developers have said that will be extended, and bulk-import is in development, so I hold out hope that this could be useful in the future.

On Kickstarter:, Beamu advertised, “Store your private files such as documents and photos on BeamU’s secure flash drive storage.”

This was actually what pushed me into pledging for Beamu. I’m always nervous about carrying files on standard flash drives, and this would have been a great compromise.

After a frustrating time trying to get my Linux box to recognise my Beamu, I resorted to reading the Kickstarter updates.

Unfortunately, due to problems with the memory module, they had to ship Beamu with no memory. The memory will come later, so I hold out hope.

Maybe the next function will be more useful.

From the Beamu Kickstarter page

This is appealing, and would be useful. But no, after over an hour of trying, it won’t connect. One person on the Kickstarter comments has managed to get it working on Linux, so I’ll keep trying.

Maybe I can use it to call my phone?

Nope, that only works for iOS. But the developers say it will be available on Android, Windows and macOS soon.

This function confused me a little. To be fair, the games actually work, but couldn’t they have put that time into one of the useful functions?

Still, if you really want to play tic tac toe, or match letters on a 1” x 1” screen, you can do that too.

As a Linux and Android user, I’m underwhelmed. Beamu is still very much a work-in-progress.

That said, the company has been communicating clearly and regularly throughout the project and is still actively responding to comments on the Kickstarter page. This gives me hope that it will continue to improve and will be useful at some time in the future.

For now, it’s an impressive device with a lot of potential, but it’s not much use to me. I’ll check in again in a month or two.